Brockworth     At Henley Bank Plantation a WOOD WARBLER calling from a mature oak at SO901171. (Terry Fenton).

Frampton     A GREAT WHITE EGRET with two Little Egrets and a Grey Heron on the flashes N of Splatt Bridge early morning. Later probably the same bird was at WWT. (Gordon Hodgson). This evening a Peregrine attacking a Buzzard, three Curlews and a Whimbrel. (Jeremy Squire). At the pools a male Whinchat, a juvenile Goshawk through SW, 200+ Sand Martins, 50+ Swallows, a Yellowhammer, 42+ Tufted Ducks and a pair of displaying Great Crested Grebes. (MK). Later c2800 Sand Martins from 11am until 2:43pm when they all disappeared in small lines and a couple of large fronts to the N. Another c1300 Sand Martins came in at 2:55pm in small groups.  When the first group left there were only House Martins and Swallows left. A Hobby flew N at 2:34pm and also two male Yellow Wagtails in flight at different times. (Ken Heron). Pics by Mike. 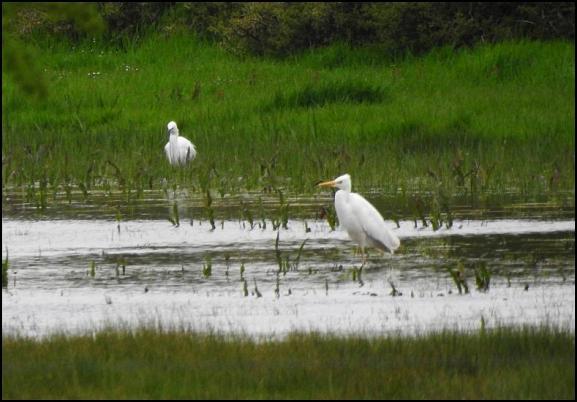 Cotswold Water Park East     At Pit 114 an adult LITTLE GULL with Black-headed Gulls at 11:30am also hundreds of Swallows and Martins and a Hobby through. (Duncan Dine).

Quedgeley     A male Siskin on a garden feeder at Shelduck Road. (Steve Pullen).