Longney     A CORN BUNTING along the Severn Way at Longney this evening, a very rare bird in the Vale. Also a Whinchat plus 212 Canada Geese and three juvenile Tufted Ducks on the river. (Andy Jayne).

Prestbury     A Swift over this afternoon. (Jeremy Squire).

Gloucester    A female/immature Marsh Harrier near the River Leadon at Over. A Little Egret on the old boating lake at Westgate. (Paul Clark). A Wheatear and Yellow Wagtails at Hempsted recycling centre this morning. (Ed Drewitt). At 9am at Robinswood Hill Country Park the Blue-and-Yellow Macaw in the main car park at Reservoir Road feeding on Hawthorn SO8375815753. Apparently has also been raiding the Walnut trees in the car park. (Ian Elphick). I saw this bird with Ian in February 2008 and it was first recorded in August 2004. It has survived in the woods and surrounding area for 17 years! Also two Ravens foraging for voles on a hay-cutting field at SO8407815762. (Ian Elphick). 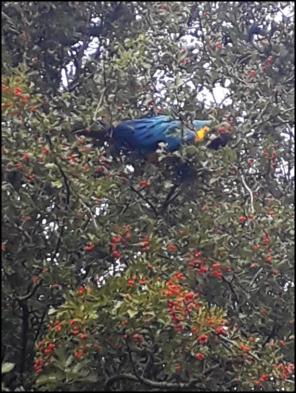 Sharpness     A Redstart at the picnic site today. (Andy Jordan).

Winchcombe & Postlip Valley     Eight Red Kites over a recently cut hay field to the W of Winchcombe on Langley Road. A Chiffchaff calling near Langley House. 8+ Spotted Flycatchers on the Isbourne Way over the Postlip Lakes with a Little Grebe on the upper lake and two Grey Wagtails. (Stuart Galey).