WWT Slimbridge     A PECTORAL SANDPIPER reported from Robbie Garnett hide briefly early afternoon. (Adrienne Sanders). An OSPREY on driftwood on the river seen from Mid Point from 9:25am this morning until 10:15am when it flew off inland in the direction of Dursley. (Slimbridge Wild).

Fairford     The OSPREY seen roosting in the North Cotswolds recently seen flying over Fairford today, almost certainly fishing at Fairford pits. This was at the same time as the WWT bird. (Duncan Dine).

Longlevens     A Ring-necked Parakeet over the garden at 7:25 this morning. (Martin Greenish).

Coates     This afternoon along the Wysis way near Coates at SO 96458 01153 three Crossbills in a pine tree and a Silver-washed Fritillary and several Commas on Bramble fruit. (Michael Cook).

Bussage     Two Greenfinches in the garden and a Painted Lady on Buddleia. (Michael Cook).

Slad     30 Swifts over the Woolpack Inn at lunchtime. (Roy Bircher).

Cleeve Hill     A male Redstart near the masts this afternoon. Also up to ten Stonechats on the Common, including several juveniles. (Chris Snook/Tom Mabbett). Pic by Chris. 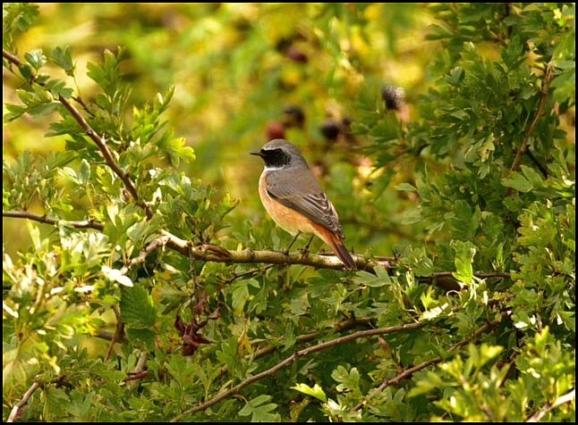