Nailsworth     A HOOPOE flew over the garden at 4:20pm heading W over Rockness towards Wallow Green. (Jake King).

Woodchester     A possible Iberian Chiffchaff heard singing this morning at Woodchester Park 1/2ml past the mansion by the steps to the lake. (Paul Skirrow). No sight or sound this afternoon only Common Chiffchaffs in the area. Also three Mandarins (2m, 1f), 11 Tufted Ducks, a Little Grebe and a Ravens nest with 3-4 large fledglings and an adult. (MK/Paul Taylor).

Cotswolds     A Swift seen with House Martins and Swallows at Grange Hill Farm N of Naunton. A Cuckoo heard at Baker’s Wood near Brockhampton. A Redstart heard at Clayhill on the Salt Way S of Roel Gate. (Keith White).

Brockworth     Three Swifts over the house this evening. (John Miles).

Brockweir     A pair of Mandarins in the garden today, a garden first. (Paul Wilkins). Pic by Paul. 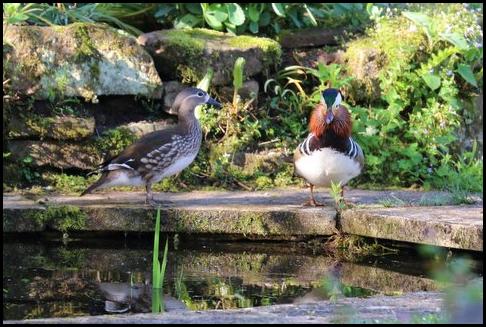