Daglingworth     A GREAT GREY SHRIKE at Park Corner in the old quarry today at SO9667104334 until midday at least. Please park carefully. (Pete Grimmitt). Pic by Mike.

Snowshill     The GREAT GREY SHRIKE still this morning at SP114335. Please note this bird is always distant and a scope is recommended. (Duncan Dine). 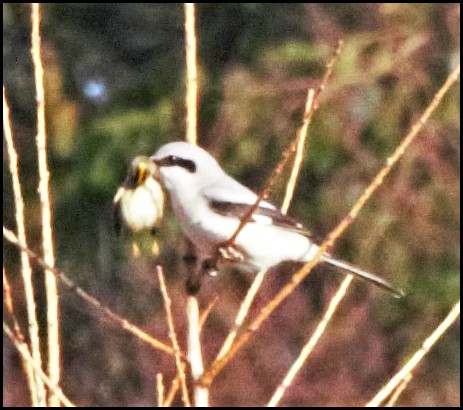 Cotswold Water Park West     The BLACK-NECKED GREBE still on Pit 16 viewed from the grassy bank off of Nightingale Way this afternoon. (Chris Snook).

WWT Slimbridge     A CATTLE EGRET on the Top New Piece viewed from Zeiss hide this morning. Also a Green Sandpiper on the Tack Piece and an Oystercatcher on the Rushy. (Ian Hull).