Epney     This morning the TURTLE DOVE for its 17th day still in gardens behind the Anchor Inn at 6:08am. Please park sensibly by the entrance opposite the seawall or on the road without blocking access and not in the pub unless you are using it. Also do not park in the private residents car park at Longney Crib. Thank you. Also a near adult Mediterranean Gull, three Oystercatchers, two Curlews, a Green Woodpecker, 12+ Goldfinches and two Little Egrets. (MK/Rhodes Haughton/Ed Betteridge). 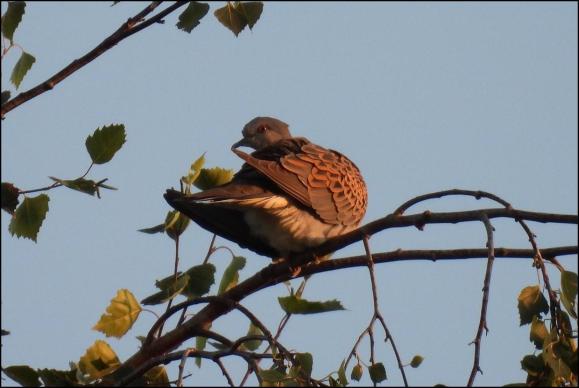 WWT Slimbridge     A SPOONBILL and two Spotted Redshanks on the Rushy. (Jon Mercer). Also two Green Sandpipers, at least four Ruff and an Avocet. Both SPOONBILLS on the estuary later. (Bob Shiret).

Roel Gate     A QUAIL calling very occasionally opposite Roel Hill Farm and another nearer Roel Gate crossroads at 6am. Both sounded distant from the road. (Simon Bradfield).

Stonehouse     A Kingfisher at the Ocean briefly, a second sighting W of Bonds mill, possibly the same one. A Cetti’s Warbler between Hoffman’s Dam and the Ocean bridge. (Paul Sutton).